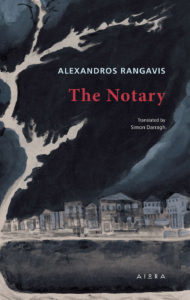 In the opening of the novel, Rodini appears before the notary Tapas asking to arrange a loan for him and on pushed hard tells the notary in private that the Count Nannetos, the wealthiest in the Cephalonia, who is unwell, has made him his heir to the inheritance after his death. To satisfy the curiosity of cunning Notary, Rodini further goes to tell him that – believing that to confide to a notary is safe – despite Yerasimos being the Count’s nephew, with all the shame and trouble he has caused, Count Nannetos has disinherited him. But it happens that Tapas’s daughter is in love with Yerasimos and he has promised to take her as his wife, and still believes that after his uncle dies he’ll inherit his riches. But Tapas, with the intention of saving her daughter – whom he loves immensely and is ready to take any trouble for her – from marrying Yerasimos, who’ll have nothing after the death of the Count, discloses the secret to Yerasimos what he heard from Rodini. Yerasimos, anxious and angry, then urges Tapas to write a false will from the Count that will guarantee his inheritance and dismiss the privately made will, and confirms that he’ll get the signature of the Count by hook or by crook. And, in return Tapas also promises to make the will valid when he gets it, and when the time is right. The Next day, Count Nannetos is found murdered on his bed. Tapas appears at the murder scene and tries to influence and settle things quietly, but when it fails, he helps the investigation leading to suspect Rodini who had left in the morning to meet his mother. Knowing well that Yerasimos killed the Count after receiving the signed will, Tapas suggests that he leave Argostoli. The investigation leads to Rodini’s arrest and the privately made will he presents at the court is dismissed and finally the court rules for the death penalty. When Marina, the daughter of Tapas, finds out that Yerasimos had been cheating on her and is going to marry her friend in Lixouri, she poisons herself and leaves a letter to her father. I’ll leave it to the readers to find out what happens next in this murder mystery and to find out who will hang in the gallows!

The novel is set on Cephalonia (One of the Ionian Islands) in the early 1820s. First published in 1855, The Notary gives us the flavor of classical murder mystery tales. The plot tapestry may not be intricate like in the modern day novels, yet is riveting. There are elements of romanticism in the story and in the dialogues that may lessen the thrill of the murder, however, the plot built around the murder is so precise, like the work of a doctor or a detective, fueled by the character of crafty Tapas, we feel the novel gently forming the curve of resolution that the best mystery tales make, with sufficient thrills until the very end. The Notary is a story built on the foundation of love, obsession, betrayal and brutality. Translation seems to be preserving the lingual idiosyncrasy of both the author and the period. And the frankness of the author visible in these two openings: ‘Having followed Rodini up to now, I must talk again of the most charming character in my drama, Angeliki’ ‘In the evening of the day on which this story began, we saw…’ makes us believe that, he wants us to enjoy the story, which we do. Leaving aside the prejudice for the modern dramatic plots, The Notary is one such enjoyable gripping tale brought back from the vault which also leaves us with some historical insight on the formation and integrity of Modern day Greece.