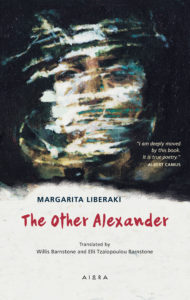 The Other Alexander – Chapter 1

Did I meet her at the ocean or at the Saronic gulf? I remember only the day, a Tuesday, and its texture. The day was hot and then overtaken by cold wind. But if I were to judge by the haze which suddenly rose from the sea and became an immovable cloud above our heads, I would say it was the ocean.
During all that period, the haze either thickened or thinned, and so with my ideas and feelings.
Especially one day—on the same shore, exactly at the turning point where the road curved uphill to the village and you lost sight of the sea—one day when I felt emptied of ideas and sentiments and began to laugh with wild joy, a sea-storm broke loose. I was still laughing when I reached the village named for Saint Peter and famous for its Benedictine. Though I swear I started laughing before taking a sip. For as I said, my laughter began on the shore. At the inn, when I found myself face to face with her at the same table, the laughter froze on my lips. Then she started to laugh, like a cat—if cats ever laughed. Sharp teeth and small ears. And her hands caressed invisible shapes in the air. This caressing had already attracted my attention at the shore. Her eyes were feline, gold-yellow with spots, and her body was supple, but without obviously furtive movements. On the contrary her step, as well as the movement of her shoulders, which follows in beat, was full of frankness. Her rhythm was entirely sincere. And if I were to liken her to an animal, I would say she was like a small colt, because of her swiftness and her desire to leap up and run. She was hasty and in continual movement and all this for nothing; for in front of the ocean her haste was without meaning and she was small as a flea, not to speak of her tiny bathing suit, speckled with minute designs of crabs, clams and little fish.
She spoke first—that also I can swear. I hadn’t shown the least disposition for conversation. As it was afternoon and the beach deserted, I sat almost hidden between a rock and a rowboat drawn up on the sand. First I saw her shoes, green sandals, just a green strap to be exact. And then a white rag which must have been her dress. She was swimming. The amusing thing was that when she came out of the water, thinking herself alone, she began to behave as if she were alone. She made believe she was running, but didn’t run, and lifted her head with infinite gratitude. She caressed the unseen shapes — I’m not exaggerating—and made other movements which people perform only in their privacy, as for instance when she raised her arm and looked at it, rubbing it as though something had pricked her, and then kissed it.
Her self-admiration in front of the sea was something which she would never forgive my seeing, and it always stood between us as a barrier—there are things which remain unsaid and unconfessed, and of course everybody has a right to his secret thoughts and movements which make up his character and differentiate him from other people. This is the beginning of character, much more than a bent towards mathematics or history. My friend and I had discussed this question and we made a point of observing the way passers-by in the streets blew their noses.
That evening, in her usual haste, she took off her clothes in front of me so quickly that I believed her dress to have been an illusion. She preferred the lights off, but during the whole time, it was as if she felt nothing. Then we began to talk about the proprietress of the inn and the way she cooked sauces. It must have been at the ocean, for now I remember there was a storm that same night and the weather was quite cold in the morning, things not likely to happen in the Saronic gulf in mid-July. The coast-line was very precipitous and wild, and the horizon was lost, whereas from the Saronic gulf you can see the islands opposite. Nor should I confuse her with the woman of the Saronic, who groaned during the whole time, who never hurried for anything, whose neck was tender as a calf’s. But both here and there were sea gulls screeching across the sky. Once—though hard to believe—I was a baby and cried in my swaddling bands and suckled at set hours and then began to eat a bit from each food and to tell wheat from the plane tree, heat from cold; and then I began to know my brothers and sisters, a difficult and confusing task, since my father had two families.

I was never late at table, which pleased my father, although he did not know, he declared, whether this was due to my respect for tradition or to an ironical compliance. “Silent revolutionaries are the most dangerous ones,” he grumbled, and his glance weighed on the broad shoulders of my brother Grigori, who, with his open temperament, could not help but cry out what­ever he was doing. He even boasted of more than he had done. He had mild eyes and shoulders upon which Father’s look could easily lean and rest.
My brother Grigori even said that he had killed. But in the family we did not believe him or pretended not to; first because of his character; and secondly if he had really killed, he did so for political reasons when murder is not exactly murder, especially if one manages to forget the human flesh and how blood spurts from a gaping wound. Moreover it was the fault of our times, for at another moment with such eyes Grigori would not have killed and might even have taken to embroidery. We say all this, presupposing he had murdered, which is very doubtful if one remembers my brother’s mania to boast of his evil deeds and to hide the good ones.
My mother broke into laughter the evening Grigori told the story of the killing, in every detail, and she interrupted him to put in her word: Grigori told white lies, she said, ever since he was a small child—tall tales and nonsense; he told how he cracked the heads of his classmates during recess, how he strangled his opponents while wrestling. Actually he had only inflicted scratches and very slight bruises.
“Furthermore you had such thin little legs,” she added, and then Grigori insisted on the murder, displaying his legs which had gotten much stronger in the meantime.
“I do not understand the sacrifice of getting
myself killed,” he said, “but the sacrifice of killing others I understand very well.”
Mother then diverted the conversation, saying that he was not careful enough and dirtied his pants. Grigori chuckled about the girls he had
led to the forest, young schoolgirls, but willing, and then Mother opened her eyes wide and looked at him in wonder, because Mother, despite her several childbirths, had the eyes of a virgin: she would never understand until her death. All these things gave her a vague unrest and she didn’t know what to do. Then she turned to the cares of the house, which can well absorb a woman if she keeps up with the supply of salt and sugar and how much of each food is required for cooking a meal.
But the thing which my father despised was that whenever I had a chance to, I lay down and closed my eyes.
“Get up Alexander!”
My eyes opened; and unaccustomed to the light, I saw rhinoceros and wide crocodile mouths; or I remained motionless and felt my father’s breath on my neck. At other times I decided to speak up for the right of each man to lie down with his eyes closed.
“Then you should go to your room,” shouted my father. “In my presence it is unbecoming.” Out of pure hypocrisy he was very attentive to whatever was dignified or unbecoming.
“Since he owns both the land and the undersoil why do you speak back to him?” said Phokion, my third brother, the only one who helped Father
in the mines—the only one from this family—although he did not have our father’s flair for finding the metal. Father found the precious veins just as a hunting dog finds the wounded bird, and he was unique as an organizer, knowing how to keep prestige with the workers. Towards his workers he had a goodness from high up, just like those people who take care not to tread on ant hills. He gave pensions to their widows and orphans, a thing well known in the district. Yet, as soon as the days became chilly, flocks of crows passed overhead, whole armies, especially towards twilight after vespers.
A shiver ran through the fields.
Father calls me his unworthy son because I neither find the veins of metal nor behave as one should towards the workers and their widows. And Grigori calls me his unworthy brother because I’ve never killed and because I am sensitive to the sight of ruins and of blood. They both agree that all this is due to my idleness and to the fact that I lie down and close my eyes at high noon.