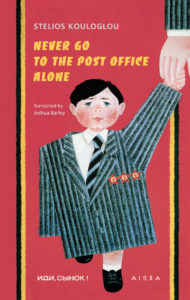 Ticket out of Hell

‘I don’t need palaces,’ says Christina, a young woman, sadly. ‘I don’t need soft armchairs or paintings. I don’t need anything.’
‘Why not?’
‘I’m a young woman.’
‘So what do you need?’
‘Don’t you know? I’m embarrassed to speak in front of everyone.’
‘A man!’ interrupts a middle-aged kolkhoz woman. ‘It’s hard for her to sleep without a living body beside her.’

Alexander Dovzhenko
Poem of the Sea

[Early December 1989, roughly four weeks
after the fall of the Berlin Wall]

‘Mr Danaher, would you hand me the video from Red Square?’
I took the tape out of my bag and gave it to Yul Hardman, the head of the FBI team. Of the three agents, only he was asking questions. His two colleagues were silently taking notes—they were about thirty-five or forty. We could have been classmates. It was a matter of hours since I had returned from the Soviet Union and I was still jet-lagged. I insisted that my ‘special briefing’—as the interrogation was euphemistically called—should take place in the newspaper’s offices in New York, with the big boss Humphrey Weber present. I felt better on my own turf, in the editors’ meeting room on the fifteenth floor of the West Broadway building. It was a cloudy day, yet one of the agents pulled down the blinds to make the television image clearer. Hardman motioned to him to put the tape into the video player. It was of the October Revolution Parade. The Soviets follow the old calendar of the Russian Orthodox Church, so the parade took place on 17 November. The images I had shot myself appeared on the screen.
Two men of the guard of honour were goose-stepping in front of the terracotta-coloured facade of Lenin’s Mausoleum, while the megaphones of Red Square played military marches and revolutionary songs. Then the camera turned towards the side where I was, the officials’ platform opposite the Mausoleum. Several citizens were holding red flags, waiting for the parade to begin. They had their backs to the empty shop windows of GUM, the great state department store. The next shot was of the platform that had been erected for the occasion. Suit-wearing diplomats and journalists were sitting on its wooden tiers. Erich, seated beside me, now occupied the screen.
The image froze as Hardman took the remote control.
‘Is that the child?’ he asked me.
I nodded. The video allowed me to think back to those moments, which had taken place over just a few days and had changed my life forever.
Erich had a large red sketch pad on his knees and was engrossed in his drawing. When he realized that the camera was on him, he turned and grinned. Then I began to shoot the first military divisions. Having come from the direction of the river, they were waiting just before St Basil’s Cathedral for the signal to march. Erich nudged me and the image wobbled.
A child’s voice could be heard: ‘Look, Kevin—Gorbachev!’
The camera turned clumsily to the Politburo’s podium atop the Mausoleum. Mikhail Gorbachev had appeared alongside his rival, the conservative leader Yegor Ligachyov, as well as the chairman of the KGB, Oleg Yelin, and the whole Soviet leadership. When the rows of missiles and the infantry had passed, the day’s unprecedented events began to unfold. For the first time in Soviet history it was permitted for the recently formed independent movements to follow the military forces in the parade. As various unofficial organizations marched past Gorbachev—such as the Committee in Support of Glasnost, i.e. of transparency in public life, and Memorial, an organization for the rehabilitation of victims of Stalinism—many of the demonstrators halted and shouted towards the Politburo, ‘Freedom for the Baltic nations!’, ‘Democracy!’, ‘Down with Communism!’. Some waved banners seeking free elections and an end to the Communist Party monopoly. The camera wasn’t steady; my hands were shaking. I was shooting a historic moment: never before in the Soviet Union, nor in pre-Revolution Russia, had the people dared to question the tsar to his face. The events developed at cinematic pace. As Gorbachev left the podium, conspicuously annoyed, he was heckled by the demonstrators. The whole of the Politburo and the president followed, generating even more heckling. A clamour, fear mixed with surprise, rang through Red Square. Every time I watch the events of that day, it gives me goosebumps.
On the screen Erich was talking to some people at the edge of the platform. They were dressed like Eastern diplomats, with grey suits and old-fashioned ties.
The image froze again.
‘Is one of those Muller?’
I pointed to the screen.
‘The blond one talking to the child. With the angular face.’
‘Was this the first time you saw him?’
‘Yes. And I didn’t even notice him then.’
Hardman turned to me. He was fifty-something, with a double chin, thinning grey hair and blue feline eyes.
‘His face immediately grabs your attention,’ he observed, pressing ‘play’ again.
The special forces of the Ministry of Internal Affairs, stationed close to the Rossiya Hotel, left of St Basil’s, began to fan out towards the square. A squadron of mounted police officers made a circling manoeuvre aimed at the demonstrators, who were still chanting slogans. Quickly, however, most of the demonstrators backed off. On the opposite pavement, outside GUM, small groups of people were discussing what had happened. The camera turned back to the platform, which had almost emptied. Then the tape stopped. One of the FBI men got up from his chair and, instead of pulling up the blinds, turned on the lights.
‘I want you to describe exactly what happened that day,’ Hardman said.

‘I had arranged to meet Erich and his mother that morning at nine in Manege Square, just off Red Square. We met outside the Moscow Hotel. A huge black-and-white banner of Lenin was hanging over almost the entire building. He seemed to be looking down disapprovingly on the manoeuvrings of perestroika. Erich was holding a large red sketch pad and wearing a blue anorak and white woolly hat, his mother a grey coat and short brown Soviet-style fur-lined boots. We arranged to meet again at twelve noon in the same place. Before she left she bent down to kiss Erich, who pushed her away impatiently. Then she turned to me and mouthed the words ‘I love you’. As we walked towards Red Square, I stroked Erich’s head and clasped his neck protectively.
‘Do you like drawing?’ I said.
‘‘My grandpa gave me this pad,’ he answered, without looking up.
‘What do you like drawing?’
‘My grandpa, my mother…’
‘Do you love your mother a lot?’
‘I love my grandpa more,’ he said curtly.
‘We went past the three checkpoints, showing our special permit, and sat among a group of African diplomats on the platform. I wanted to avoid indiscreet questions from any early-rising colleagues of mine, and from the American diplomats, most of whom I knew pretty well. I didn’t leave that spot, nor did I speak to anyone. Then I began to shoot what you’ve just seen.’
‘Then?’ asked Hardman. His voice was neutral. I couldn’t tell if he believed me.
‘When I put down the camera and looked around, most of the diplomats and journalists had already left. Only then did I realize that Erich wasn’t there. I hurried off the platform and searched for him in the receding crowd. Despite my best efforts I couldn’t find him anywhere. As the crowd thinned further, I felt weak at the knees. I wanted the ground to swallow me up. They say there’s no greater nightmare than losing your child in a crowd, but that’s not true: the worst thing is losing someone else’s child, whom they have entrusted to you. It was after twelve noon now and Red Square was empty. Only some elderly street sweepers were left, wearing torn clothes and brightly coloured headscarves sweeping up. I took a deep breath and headed towards the meeting point, hoping that the child had gotten caught up in the commotion and we would find him soon. I can’t explain it any other way than to say that he had suddenly disappeared from my side.’
‘And you hadn’t even suspected the boy’s true identity?’ asked Hardman. In his voice I detected a whisper of irony. I didn’t know if he took me for a liar or a fool.
‘They hid it from me. I’m not in the FBI, after all.’
‘Well, you’d better tell us everything from the start,’ said Hardman, seeking approval in Weber’s indifferent gaze.