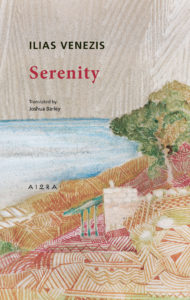 The story of Serenity starts in July 1923, when a faction of refugees from Phocis (who may have origin in the Asia Minor) like many other displaced during the Great War (1914-1918) or during the population exchange in the aftermath of Greco-Turkish War (1919-1922), is allowed to settle in Anavyssos – a barren, desolate and rugged, untilled coastal land, close to the salt pan in the Saronic Gulf. Initially afraid of the wilderness and full of doubts and fear about their new home, the refugees finally settle with the allotted lands and build their shacks with the government help. However, the locals from the surrounding do not favour their presence and are determined to create trouble for them if necessary. Among the refugees are Dimitris Venis and Irini–who once belonged to the nobility, and is unhappy and unsatisfied with their status, is filled with sullenness all the time and irked with her husband, a doctor by profession who has chosen to settle here. Another couple of Fotis and Eleni is close to the Venis family and all of them had lived closely during their stay on Aegina during the Great War. Soon after they’re allotted lands for shacks and cultivation, and as the land was famous site of excavation for buried antiquities and tombs, Fotis and Eleni, with the help of an elderly water diviner, after arduous digging come upon a buried kouros in their land. Meanwhile Fotis waits for the opportune moment so that he can bargain a good sum for the antiquity he has found, a heavy downpour and flood hits the settlement, and brings tragedy to his hopes.

Shortly Anna and Irini’s sister Maria come from Athens to join them at Anavyssos. Maria is gradually losing her eye sight and her only hope is to wait for the return of her son Angelos, who was separated from them during the war and was taken prisoner, like many relatives of the people from the settlement. Similarly, Anna, the daughter of Venis couple, is full of hope to reunite with her young lover Andreas, who was together with Angelos. The first part of the novel ends with the arrival of Andreas, and sadly with the news that Angelos is no more, but Dimitris asks him not to reveal it to Maria. We see many lives connecting in Anavyssos – some lost family members, some are displaced from their homeland and are left with nothing but memories and hope to finally find the peace. Irini is suffused with desperate hopelessness, frustration and humiliation, making her feel estranged among her own, while Dimitris and Fotis are trying to find a purpose and riches even if it means following fascination. Dimitirs seeks the courage, or Serenity as he tells his daughter, from the biographies of Napolean and Captain Scott and is hopeful of his rose garden, and Fotis tries to make a fortune from a fish boat and trade. Andreas is burdened and traumatized with the memory of hardships and loss he had to endure, and thinks that his childhood was taken away from him, leaving him with sad experience, restlesssness and desolation only he can understand. However, Anna tries to rekindle his failing spirit and hope. They make a trip to Aegina in Fotis’s boat and find a new meaning to their shared memories and love on the island. However, with the arrival of some new faces in the settlement, things take a different turn and the brightness and vigor we feel coming in the lives of Dimitris, Andreas and Anna is shattered again in brutal and tragic sequence of events.

Serenity is a novel full of voices. As refugees struggle to harmonize and find livelihood and peace in their new home, the author carves out their natural voices from the depths of their past, aspiration and dreams and makes the texture of this new life so palpable through scenic narration, we feel the turmoil left by the war, and human sensitivities shaped by this unprecedented new challenge. The composite nature of the text welcomes humans as well as the nature as a force in this new life. For instance, even salt pyramids are free to observe the Phocians and their new rituals. At moments, it looks like a connection between humans and the Earth is finding a language through the novel. Also, the author takes the liberty of coming face to face with the readers – and this makes the work more personal for both him and us – in an enigmatic tone.